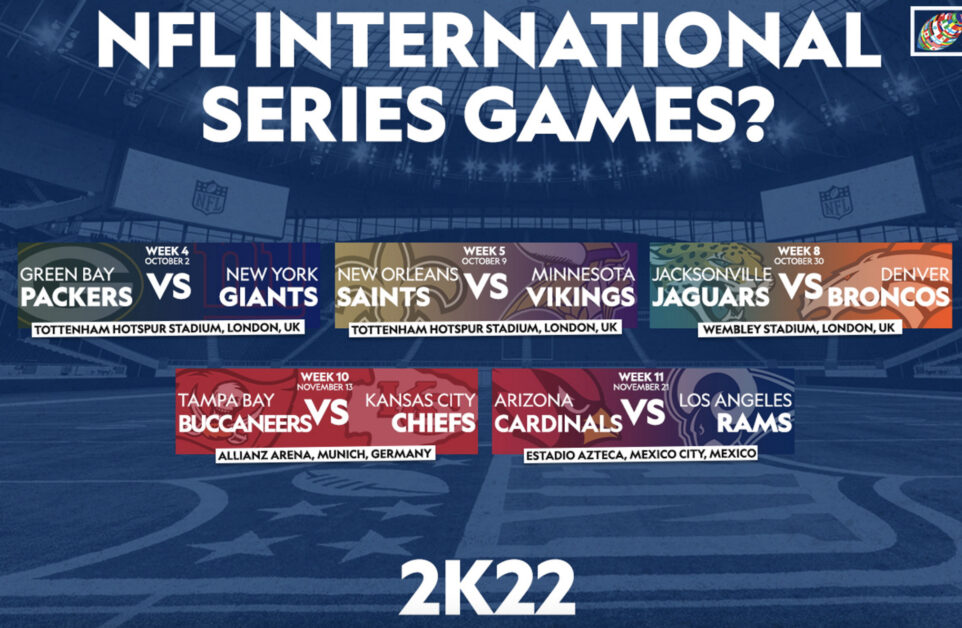 The NFL has been playing games internationally since 2007, when they started playing games in the United Kingdom, and have since expanded to Mexico and Germany. Since 2007, the NFL’s International series has played a total of 39 games, with 33 in London, five in Mexico, and one in Germany, which is the newest addition to the list of locations.

In 2022 alone, there were five games played, with three in London and one each in Mexico and Germany, which had fans checking NFL odds earlier than normal due to international time differences. Outside of the International Series, the NFL has also played games in Toronto, Canada, and hosted one game a year for the Buffalo Bills from 2008-2013.

With the great success from high attendance and growth of fans in international markets, the NFL will continue to play games in London and Mexico as normal but also include more in Germany and other markets. As the game continues to grow overseas, the list below is some places already being considered, as well as other places we fans would love to see an NFL game played.

Recently mentioned by Brett Gosper, NFL head of the U.K. and Europe, Spain is one of the locations the NFL plans on looking to in the future for an International Series game. With the International Home Marketing Areas initiative that was announced for this season, the Chicago Bears and Miami Dolphins have already been marketing their teams in Spain which means one, if not both, of those teams, will likely play there in the opening game in Spain.

Along with the marketing initiative that is already in place, Spain is a great location due to their already-built stadiums that could easily sustain a big crowd. Camp Nou is one example of a great stadium, as it is home to FC Barcelona and can hold around 99,000 fans. Soccer (or Futbol) lines would quickly shift to NFL lines in this stadium.

Another country recently mentioned by Brett Gosper is France. Unlike Spain, France does not currently have the International Home Marketing Areas initiative implemented in their country, but I am sure as the campaigns prove successful, they will be next in line. Like Spain, France has plenty of stadiums from their soccer clubs, including Stade de France just north of Paris that can host just over 80,000 fans.

This would be the first country the NFL will play in where the native language isn’t English or Spanish speaking, but it would be a great place to send NFL teams to play. American football is already played in France with the Championnat Élite Division 1, which is French for ‘Division 1 Elite Championship and would be a solid place to expand the International Series.

While there have been games played in Toronto in previous years, it was strictly The Bills’ Toronto Series which was mutually terminated in 2013. With the success of the CFL and the overall popularity of football in Canada, it would be smart to head back there in case the NFL could expand there as the NBA and MLB have with their Toronto teams.

Outside of Toronto, Vancouver would be a potential city to play a game as it is just north of Seattle and was also host to large events like the 2010 Winter Olympics. Vancouver is already home to a CFL team with a stadium capacity of 54,000, which is smaller compared to what France and Spain could offer. The largest stadium built for a football game in Canada is located in Edmonton at Commonwealth Stadium, which can host 56,000 fans.

With football fans already established and still growing, along with the time difference having no real effect compared to Europe, Canada would be a great option for the NFL in future games.

While Vegas NFL odds will be all over any game no matter where it is played, the three places above are certainly not the only places a game could be played. With the addition of sports like the LIV Tour and UFC, the United Arab Emirates would be another potential place a game could be played as soccer stadiums are already built.

Another potential location would be Australia but it would be difficult due to long travel and time differences.