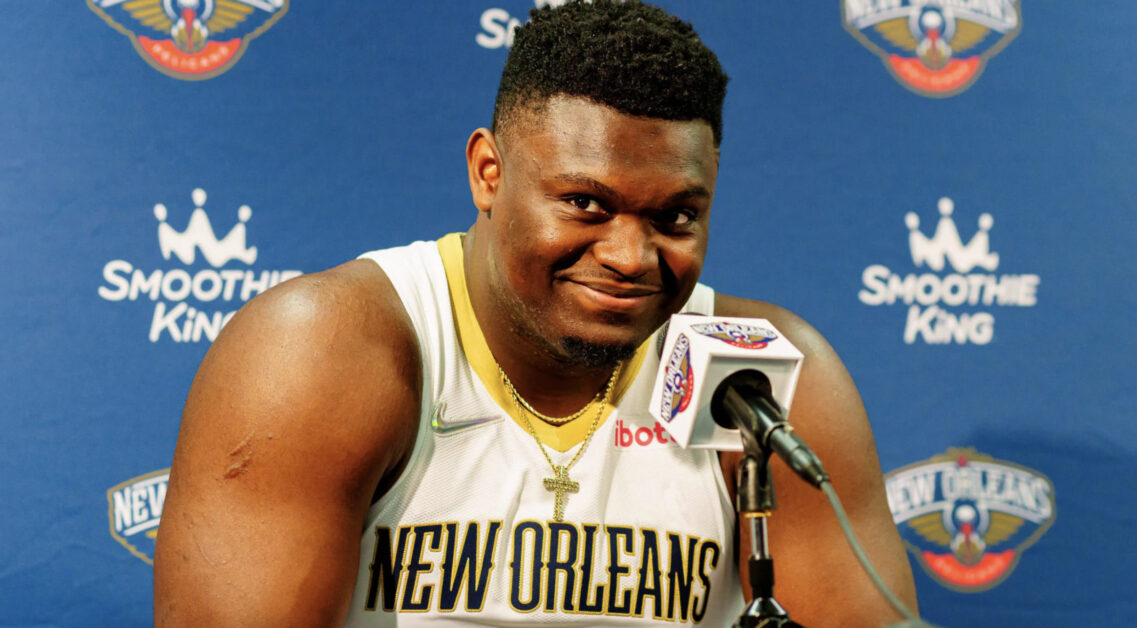 The New Orleans Pelicans are among the NBA picks today to potentially represent the Western Conference in the NBA Finals, as the dynamic duo of Zion Williamson and Brandon Ingram are powering them night in and night out.

Williamson is averaging over 23 points, seven rebounds, and four assists per game, but there was a point where Williamson was at his absolute lowest.

“I was in dark places at times,” Williamson said in an interview with Sports Illustrated, “because I couldn’t play basketball. I could only do limited rehab things. And then just seeing how the world reacted? It took a lot. It did a lot on my spirit.”

Williamson was dealing with a major foot injury during the 2021-22 season, as there were multiple times he thought he would return to the court. However, that didn’t come to happen, as the criticism grew louder and his family, including his mom, stepfather and 8-year-old brother, had to deal with the fallout of it.

“I felt helpless. I couldn’t do anything about it. While [pundits] are telling me I don’t care about my teammates, or I’m a bad teammate, or I don’t want to be somewhere, the whole time I’m worried about my foot. I’m worried about, Man, I hope my foot heals right, because if it doesn’t, who knows, I may not get to play basketball again.”

Coach steps up to help

Williamson came to a point where he could no longer mask his issues, as Pelicans assistant coach Teresa Weatherspoon, a close friend and confidant of Williamson, seemingly noticed that the former first-overall pick wasn’t himself.

“And when he said no, he just fell into my arms,” Weatherspoon said.

The two later spoke about the issues at hand, as Weatherspoon was able to provide counseling with unconditional support, but tough love with a lot of tears being shed.

“At that most vulnerable moment, it was important for me to let him know that he’s a great young man and he’s worthy of those things that you work for,” says Weatherspoon, the former WNBA star and Hall of Famer. “I could see a young man fighting to find his way, had lost all sense of direction. And I just wanted to reach out at that moment and to let him know: I didn’t care about basketball; I cared about what he was feeling, what he was thinking, how difficult things were for him at that moment.”

Williamson ultimately leaned on Weatherspoon to get him through some of his darkest days, as he viewed her as a big sister.

“She saved me from so many kinds of mental breakdowns,” Williamson said. “When you see somebody cry for you because of what you’re going through—she cried for me. She didn’t have to do that. . . . And just seeing that made me realize, “Wow, I really have somebody special in my corner.”

Williamson once believed that he needed to get validation from others for him to feel any sort of happiness or validate his status as an elite NBA player. However, he is seemingly at peace with just focusing on validating himself irrespective of other people’s opinions.

“If you would have asked me two years ago, I definitely would have said, ‘Yeah, I need to remind people. I need to show the world who Zion is,’ ” he says. “But now, after this journey, it’s not even so much about showing the world who I am. It’s more so just proving myself right.”

With all of the toxic jokes and narratives Williamson has had to deal with on social media, and in the press, it’s great to see the former Duke standout reclaim his power and overcome all of these obstacles that could’ve prevented him from sticking around in the NBA.

When Williamson is healthy, both physically and mentally, there is no doubt that he is one of the most electrifying players in the game today.